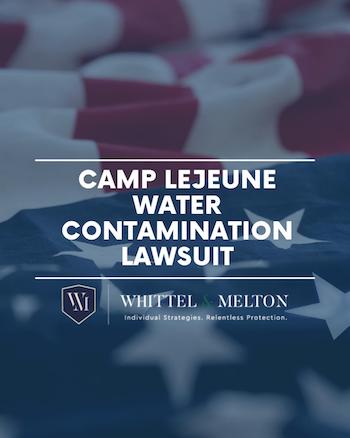 Our lawyers at Whittel & Melton are now taking on cases for victims of Camp Lejeune who were exposed to toxic chemicals and water contamination while on the military base. The years of death and suffering by the people on this base are horrendous, and now those victims may finally be able to get a reasonable amount of money to compensate them for all of their losses.

We will never charge you any fees unless we are able to recover financial compensation for the harm that you had to endure.

The public water supply at Camp Lejeune Marine Corps Base in North Carolina was found to be contaminated with toxic chemicals for more than 30 years, specifically from 1953 to 1987. This translates to over a million soldiers and their families drinking and bathing in water contaminated with dry cleaning fluids, industrial solvents lead, fuel, benzene, mercury and other toxic wastes. Because of this, thousands of marines and their family members have suffered serious illness – cancers and even injuries to children while in utero – and have died.

The U.S. Senate is scheduled to take a final vote on whether to pass the Honoring Our Pact Act (HOPA), which includes the Camp Lejeune Justice Act of 2022 that was passed by the U.S. House of Representatives allowing for all families to seek justice in the form of financial compensation for all injuries incurred as a direct result of the water contamination at Camp Lejeune.

President Biden is expected to sign the bill into law immediately.

The Camp Lejeune Justice Act of 2022 is unique in that the federal government is usually exempt from any lawsuits filed by service members in the military for injuries. This important Act will carve out a new precedent.

900,000 Veterans and Their Families Suffered

The numbers are shocking: around 900,000 people were assigned to Camp Lejeune while the federal government was dumping toxins in the water supply. It is believed that 500,000 of people that were assigned to this base are still alive. The sad truth is that most of them have developed serious illnesses as a result of the contaminated water.

There are two treatment plants that were found to be the culprit for water contamination at Camp Lejeune: the Tarawa Terrace Treatment Plant and the Hadnot Point Treatment Plant.

The Tarawa Terrace Treatment Plant was found to have contaminants from perchloroethylene (PCE), an uncolored liquid that is usually used for dry cleaning. The source of the contamination was linked to an off-base dry-cleaning company. The Agency for Toxic Substances & Disease Registry found that the PCE levels at the Tarawa Terrace Treatment Plant far exceeded the normal levels between 1957 and 1987.

If you served at Camp Lejeune, specifically between 1953 and 1987, and then found out you have a serious health condition, then you may be eligible to join a class action lawsuit. We urge you to contact our lawyers at Whittel & Melton now at 866-608-5529 or contact us online for a free consultation to find out how we can help you.

There have been many diseases linked to exposure from the contaminants in the water at Camp Lejeune, including:

Other medical conditions linked to the toxic water exposure at Camp Lejeune include:

The Centers for Disease Control’s Agency for Toxic Substances & Disease Registry released a report in 2013 concluding what they started in 2003. This study was centered on children who were born to mothers who drank the toxic water at Camp Lejeune. The study found that these children were four times more likely to suffer birth defects, like spina bifida, as well as an elevated risk for childhood cancers, like leukemia.

If you think your child’s medical condition can be attributed to contaminated water at Camp Lejeune, then we urge you to call us now at 866-608-5529 or contact us online 24/7.

The Hadnot Point Water Treatment Plant at Camp Lejeune produced 12 pounds of elemental mercury in September 2012. The water plant was shut down several weeks to clean up the mercury.

Officials have linked the mercury contamination to water pressure meters containing elemental mercury that were removed from the plant in the 1980s.

Mercury exposure can produce the following side effects in humans:

Sadly, pregnant women and new moms can pass mercury on to their unborn and newborn children. Young children are more likely to be exposed to mercury vapors they have smaller lungs than adults and breath faster.

If you think your loved one has suffered an illness linked to mercury exposure at Camp Lejeune, you may be eligible to file a claim for financial compensation. Our legal team at Whittel & Melton can help you determine what steps to take next so that you can achieve justice.

We Are Your Camp Lejeune Lawyers

If you or a family member was stationed at Camp Lejeune in North Carolina between 1957 and 1987 and has suffered an illness or injury that you think is a direct link to toxic water, then we strongly recommend that you contact us to find out if you are eligible for financial compensation.

You served our country. Let us serve you and help you get the compensation you rightfully deserve after being placed in harm’s way by the negligence of the federal government. Call us now at 866-608-5529 or contact us online for a FREE consultation.