Recognizing the signs of domestic violence and domestic battery are critical first steps in receiving the help you need. While the road ahead may seem overwhelming, our domestic battery attorney in Gainesville is here to help. 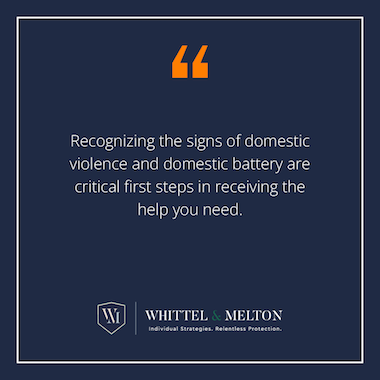 If you're ready to take the next step in the process of seeking justice and protecting yourself and those you love, it's time to call Whittel & Melton.

Domestic Violence vs. Domestic Battery: Is There a Difference?

According to Florida statutes 741.28(2), domestic violence is defined as an act or threat of physical harm, bodily injury, sexual assault, or other forms of coercion committed by a current or former spouse, parent, or guardian the victim.

While domestic battery focuses heavily on physical harm, domestic violence, as a whole, can encompass a vast array of behaviors and actions that are committed to control and manipulate the people around the perpetrator. 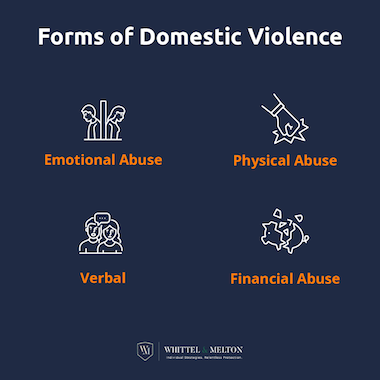 Some of the most common forms of domestic violence include:

The most insidious thing about emotional abuse is that the victims often don’t recognize it for what it is. Instead, they blame themselves for the abuse inflicted upon them. 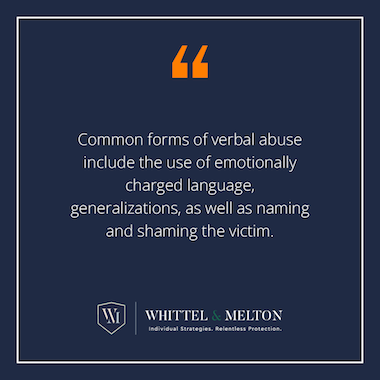 Finally, financial abuse is another under-reported form of domestic violence that involves the exploitation of a person’s financial resources to control and manipulate. Financial abuse can include things like:

Under Florida law, domestic battery is described as the intentional use of force or violence, or the threat of such, against a person that is a part of the same household as the perpetrator.

Domestic battery is a subset of domestic violence. It is a form of abuse committed between two people who are in an intimate relationship with one another, such as a husband and wife, boyfriend and girlfriend, or roommates.

Battery charges typically are broken down into simple battery and felony battery:

Simple Battery is the intentional use of force or violence or such threat against a person. It is the least severe form of domestic battery and is typically a first-degree misdemeanor.

The most common examples of simple battery cases involve a small amount of violence or contact. For example, one person shoves another person or spits on them, or one person forcefully grabs another person’s arm or hair. The violence was relatively minor in these cases, and no one was seriously injured. However, even a single act of domestic battery can result in a criminal charge in these cases. 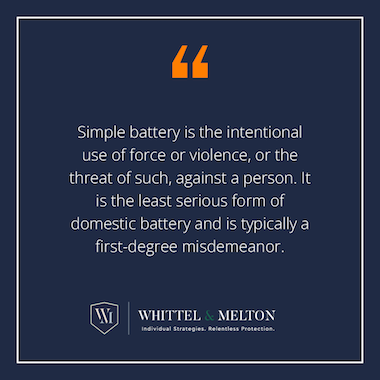 Felony Battery is the intentional use of force or violence, or the threat of such, against a person that causes great bodily harm or sexual violence. It is the most severe form of domestic battery and is typically a third-degree felony.

Domestic battery by strangulation is an all-too-common example of a felony battery. It is defined as a person knowingly and intentionally interrupting or obstructing either the normal breathing or circulation of the blood of someone in their household or relationship. 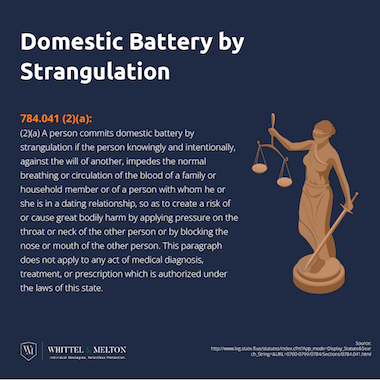 What Happens if Someone is Charged with Domestic Battery in Gainesville, FL?

In other cases, a person may be arrested and charged with domestic battery by an officer who has probable cause to believe that the person committed a domestic battery offense while still at the incident scene.

Depending on the severity of the situation, the individual being charged may or may not be offered bail.

In many cases, a person will be offered bail, which can be posted by a bail bond agent instead of cash, to ensure that they return to court on their next court date. In other circumstances, the judge may order that the person be held without bail until their next court appearance.

What is the Standard Sentence for Domestic Battery?

If the person is found guilty of domestic battery, their sentence will be determined case-by-case. This is why it's crucial that you work closely with a Gainesville domestic battery attorney from the Whittel & Melton team. An attorney can explain the likely sentence and help build a strong defense against battery charges.

However, if the person is found guilty of a felony count of domestic battery, their sentence will be more severe. For example, a person convicted of a third-degree felony for domestic battery by strangulation will typically be sentenced to a prison sentence of up to 5 years. They will also be required to pay a fine of up to $5,000. 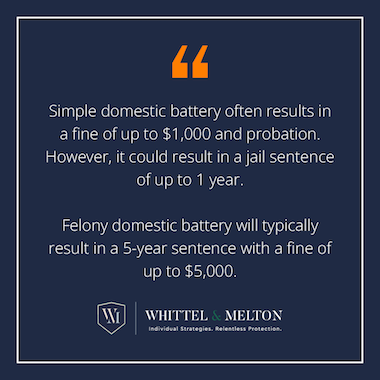 Domestic battery is a topic that should never be taken lightly. As a victim of domestic battery, you may be feeling powerless and overwhelmed by the situation. We at Whittel & Melton are committed to helping victims regain control of their lives and work tirelessly to achieve the best possible outcome in every case.

If you or a loved one are dealing with domestic battery in Gainesville – please, contact the team at Whittel & Melton today.