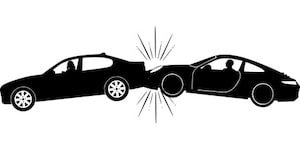 Tailgating, or following too closely, is a traffic violation that most commonly falls under the category of reckless driving in Florida. Florida Statute 316.0895 defines the law pertaining to following too closely. Tailgating is usually listed as the cause of an accident, which can definitely prove useful when determining fault and liability for insurance purposes.

Tailgating is often considered an aggressive form of driving, sometimes even considered a form of road rage. And while it is normal to become frustrated while driving at some point, no motorist should let their anger behind the wheel lead to a catastrophic collision. According to the National Highway Traffic Safety Administration (NHTSA), 14 out of every 10,000 drivers across the United States have received a ticket for following too closely - tailgating. Moreover, 33% of all auto accidents in the country fall under rear-end collisions, often the result of tailgating.

Accidents that arise from following too closely, or tailgating, are often presumed to be the fault of the rear ending driver because they did not have enough room to stop or slow down before hitting the vehicle in front of them. It is thought that you should leave enough distance between your car and the car in front of you to avoid a crash - the rule of thumb is to have a three second following or one car length for every 10 mph of speed. So, if you are going 20 mph, you should have two car lengths distance between you and the car in front of you, but if you are on the highway travelling at a faster speed of 60 mph, you would need to have six car lengths following distance.

Determining a good amount of space between your vehicle and the one in front of you can be hard to do as a driver. The rules are subjective and can vary depending on the speed limit, weather conditions and even the condition of the road. When an accident is the result of tailgating, this is often believed to be a sign of aggressive driving, but could also be a sign of distracted driving. The AAA Foundation for Traffic Safety conducted a study that found texting while driving makes you seven times more likely to rear-end the car in front of you.

Is the Tailing Driver Always Responsible for a Rear-End Collision?

In any of the above situations, the driver of the rear-ended car would likely be found at fault.

The NHTSA says that rear-end collisions are the most common and frequent type of crash in the U.S. These collisions can result in very serious injuries and even wrongful death. If you have been the victim of a tailgating accident, our Brooksville Tailgating Crash Attorneys at Whittel & Melton are here to help you establish your rights and obtain compensation for damages. We can fully investigate your crash and identify pertinent evidence that will help support your claims and hold the at-fault driver accountable for their negligence.

Our Spring Hill Rear End Car Accident Injury Lawyers want to reiterate that every driver on the roadway has a duty to follow the rules of the road. A breach of this duty that results in an injury to another motorist falls under the definition of negligence. We are here to help you file a claim for financial compensation for damages. We want to make sure you recover full and fair compensation for your pain and suffering. A consultation with us is always free, so we urge you to call us today at 352-666-2121 or contact us online.