Domestic Battery is a serious crime, and it can have serious consequences.

Domestic violence is a serious problem in many households. If a violent situation escalates to the point where police are called, the defendant will be arrested, and a criminal case could be filed.

However, many cases of domestic violence are never reported to the police. In those cases, a victim may choose to seek the advice and assistance of a Boca Raton, domestic battery attorney. A lawyer can help a victim explore their legal options, such as obtaining a protective order or seeking compensation for damages.

A Boca Raton domestic battery attorney can also educate the client about their rights and responsibilities under Florida law and provide legal advice and advocacy in a domestic violence case.

If you've been falsely accused of domestic battery, then you'll want to also reach out to a team of legal professionals to help you navigate this difficult situation and protect your rights.

At Whittel & Melton, our Boca Raton domestic battery attorneys are committed to providing compassionate, aggressive legal representation to our clients. We are ready to fight for your rights, so call us today to schedule a consultation regarding your case.

What is Domestic Battery?

Domestic violence occurs all too often, leaving victims and the wrongfully accused scared, confused, and searching for answers. We can help.

In 2019 alone, there were approximately 105,289 incidents of domestic violence reported to Florida law enforcement officials - resulting in some 66,000 arrests. Unfortunately, domestic violence is an umbrella term that often fails to capture the complexity and nuances of these situations. 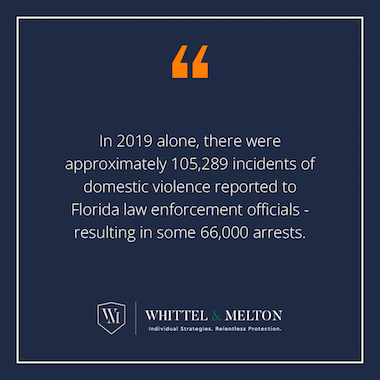 Domestic violence can take many forms, including physical, verbal, and sexual abuse. It can also take the form of threats, intimidation, and coercion, whether those actions are used by a partner, family member, or acquaintance.

Domestic battery is defined under Florida state law as domestic violence under 741.28. "Domestic violence" encompasses any form of assault, battery, aggravated assault/battery, sexual assault/battery, kidnapping, stalking, false imprisonment, or other offenses resulting in physical injury or death of a household or family member.

In simpler terms, domestic battery is any assault, battery, or other illegal act committed against a current or former spouse, partner, or roommate. It can also include acts of violence against children or other family members, such as a parent, child, or sibling. 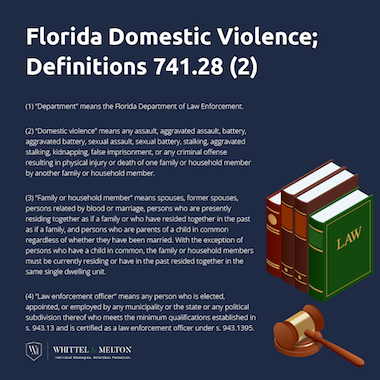 What Happens When You Get a Domestic Violence Charge in Boca Raton?

As a result of a domestic violence charge in Boca Raton, you could be facing serious consequences, including time in prison, expensive fines, and a criminal record. The severity of the situation will be determined by several factors, including the nature and extent of the alleged crime(s) committed.

On the other hand, if you are accused of simple battery, defined as a single unwanted or unwarranted touching, you could face a first-degree misdemeanor charge. This means that you could be facing up to one year in prison, fines, and penalties.

Is Domestic Battery a Felony in Boca Raton?

In Florida, domestic battery can be charged as either a misdemeanor or a felony, depending on the severity of the crime.

For instance, assault and battery under Florida law are broken up into several different sections, including:

The law states that in the case of battery, a person who commits battery will be charged with a misdemeanor of the first degree. A second offense or any subsequent battery is then considered a felony of the third degree. 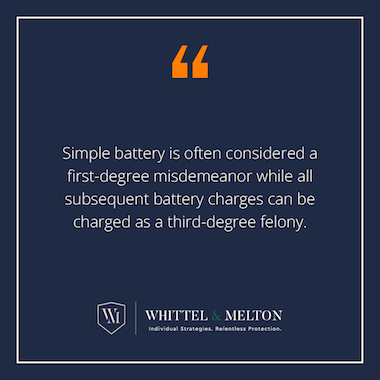 How Much is Bail for Domestic Battery in Boca Raton?

Bail is the amount of money a court requires a person arrested for a crime to post to secure their release. The bail amount is determined on a case-by-case basis and is intended to ensure that the defendant appears in court. 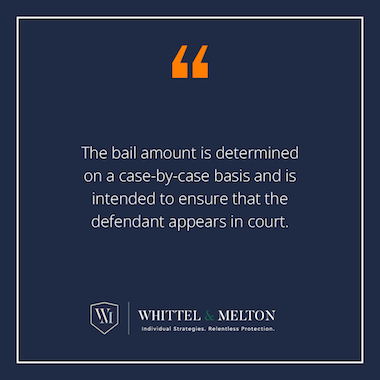 Misdemeanor domestic battery is usually considered a bailable offense, while felony or capital battery is not.

If you've been arrested for domestic battery, it's crucial that you speak with one of the Whittel & Melton Boca Raton domestic battery attorneys. An attorney will be able to evaluate the situation and determine if bail is appropriate. If bail is deemed necessary, the attorney will be able to work with the judge and the prosecutor to ensure that you can secure your release.

Contact us today to learn more about your legal options.

What is a Typical Sentence if Found Guilty of Domestic Battery? 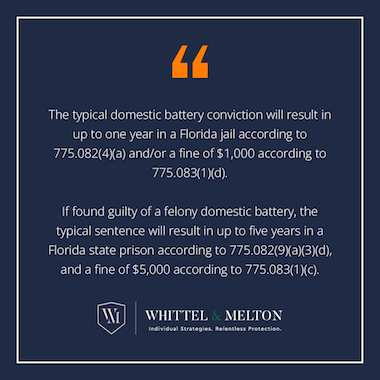 In addition to this, a felony domestic battery conviction will result in a criminal record that can negatively impact your ability to find a job, obtain housing, and more.

Reasons You May Need a Domestic Battery Attorney

Whether you're the one filing domestic battery charges or the one facing these allegations, it's crucial that you speak with a domestic battery attorney from Whittel & Melton as soon as possible. An attorney will be able to evaluate the situation and determine your best course of action. An attorney will be able to help you protect your rights, ensure that you receive the best possible outcome, and protect your future.

If you were arrested for domestic battery and are being asked questions or are being investigated for the incident, it's possible that the answer you give to the police may be used against you in court.

An attorney will be able to advise you on the best course of action in these circumstances, including whether or not you should answer questions or invoke your right to remain silent.

They will also be able to prevent you from self-incrimination by ensuring that you receive the best possible representation throughout the legal process.

Have Charges Against Yourself Dropped

A Boca Raton domestic battery attorney from Whittel & Melton may be able to negotiate for or secure a dismissal of the charges against you. This could be especially beneficial if you were the one who was falsely accused of domestic battery.

Get Help with Your Domestic Battery Case from Whittel & Melton Today

If you or a loved one is facing domestic battery charges or are the one filing the complaint, it's crucial that you speak with a domestic battery attorney as soon as possible. An attorney will be able to evaluate the situation, provide you with the best possible advice, help protect your rights and ensure that you receive the best possible outcome.

If you are in need of a Boca Raton domestic battery attorney, please, do not hesitate to reach out to Whittel & Melton today.