Our team of Miami Florida Wrongful Death Lawyers and Property Loss and Insurance Dispute Attorneys, Former State of Florida Investigators and Law Enforcement are ready to investigate your claims immediately. Do not Delay. To be sure the Insurance companies have been investigating this tragedy from hour one with an eye to either place blame elsewhere or pay the very least possible. We expect the insurance company representatives to be working overtime to diminish any financial exposure from this loss. 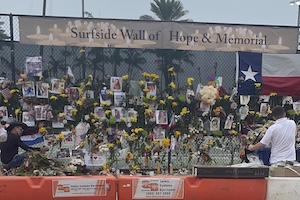 On June 24, 2021, a 12-story condominium building in Surfside, Florida collapsed resulting in at least 11 deaths and 150 more people still unaccounted for. A massive search and rescue mission is still underway as firefighters and rescue crews continue searching for missing people.

An estimated 55 of 136 units were destroyed in the building collapse that happened just 6 miles north of Miami Beach in Surfside, FL.

Family members of those that have not been found are getting frantic. Cameras, drones, search dogs, and other methods are being used to help find any possible survivors. Rescue efforts have been slowed due to rain, wind, and fires that have broken out from the rubble that remains.

Why Did Champlain Towers Collapse?

The exact cause has not yet been determined, and engineers investigating the collapse say it could take a long time to get to the bottom of what actually happened.

Some light has been shed after video footage of the collapse has emerged showing that an underground parking garage underneath the residential part of the building could be the culprit. However, some initial information has come to light after experts examined video footage of the It is a theory that this is where the initial failure happened and set off a “progressive collapse,” meaning that when one part fails this sets off more parts around it to fail at an increased rate.

While the condos were built in the 1980s on drained swamp land, a report shows that the building has been sinking since the 1990s. Reports also show that the building did pass an inspection just one day before the collapse happened.

Florida governor, Ron DeSantis, is promising to get to the bottom of the issues so that families get the answers they deserve.

What Help is Available for Victims?

Residents in the rest of the condos and in neighboring buildings have been relocated to hotels close by. A center for information has been set up for residents to meet and get information as it becomes available.

The White House is also monitoring the situation. Federal resources will be made available once the Governor declares the collapse an emergency.

Anyone that has family members in the condos, whether marked safe or still missing, should call 305-614-1819 to account for them.

What is Happening to Prevent Any Further Collapses?

The age of the building and other factors are all prompting officials to keep similar events from happening.

There are about 59 other nearby buildings that are at the 40-year mark or at the 40-year recertification process that the Champlain Towers just went through.

Who is Responsible for the Collapse?

When it comes to building collapses, the only way someone can be blamed is if the collapse occurred because of negligence. For this specific collapse, it is unclear yet who could be responsible.

Lawsuits of this magnitude and involving so many different parties will be long and complicated. Those who could be responsible include:

A lawsuit for the Surfside building collapse has already been filed against the Champlain Towers South Condominium Association, Inc.

The lawsuit states that the condo association did not do its duty to protect the people and property that reside in the building. The lawsuit states that repareis and structural issues were identified but never remedied. The lawsuit goes on to further claim that the Champlain Towers Condominium Association was negligent with the lives and property of the residents and could have prevented the collapse by taking into account the issues that needed to be fixed and repairing them properly.

The lawsuit is seeking restitution, disgorgement, equitable relief, reasonable costs and attorney fees, and more which is expected to exceed $5 million.

Our Miami Wrongful Death Lawyers at Whittel & Melton are currently looking into the building collapse in Surfside, Florida for any causes for legal action. We are ready to take on personal injury, wrongful death and property loss claims.

If you or a family member experienced financial loss from property or was personally injured, or family member died due to the collapse, please call us to discuss this tragedy and allow us to begin an investigation for you with our team. 866-608-5529 toll free or contact us online to request a free consultation to learn more about what you can do to take legal action against the probable multiple parties that failed to keep Champlain Towers South safe.